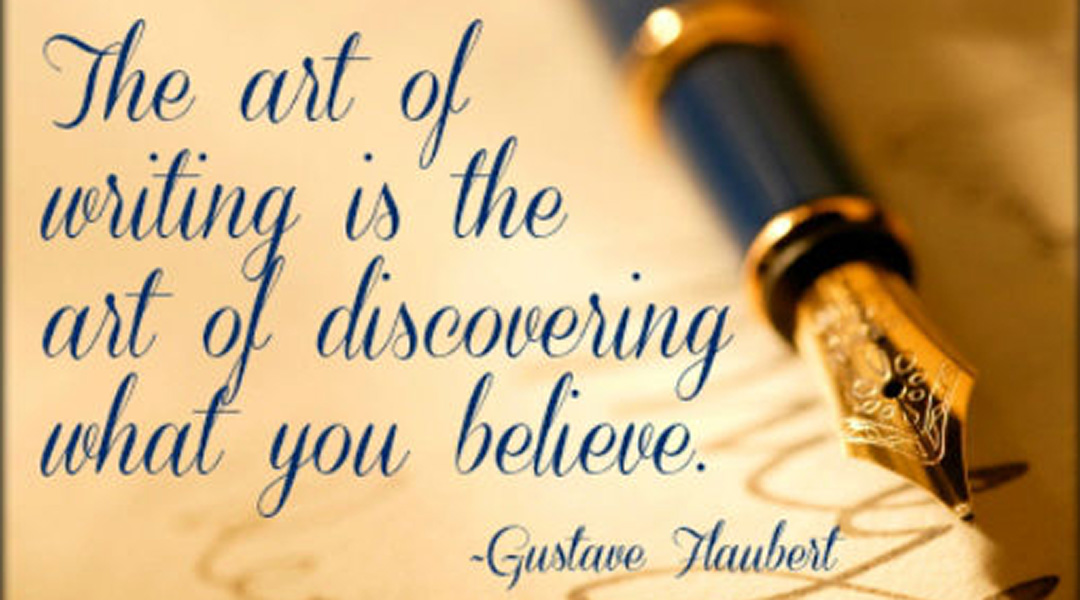 I think it’s time I posted an update on the reason why I write these posts. I have, and always have had, a really strong desire to learn, especially about this experience we refer to as life. And without hesitation I can say that the above quote by Richard Bach, which I read many years ago, has had a lot to do with it. Even though I’m not trying to teach anyone but myself, his words are always dancing in my mind. I have found that when I write about my beliefs I learn as I write, which helps reinforce those beliefs.

It seems the universe conspires to offer help in reinforcing the subject (belief) I’m writing about at any given time. For example: I was looking for an appropriate image for this post, and the second one to appear in my vision was the one above. The quote it contains by Gustave Haubert could not be any more reinforcing to my subject.

Most people would call it coincidence, but because of my beliefs I can’t accept that. I firmly believe there’s no such thing as coincidence in an intelligent universe. To believe there is would run contrary to what I’ve learned over the years when scrutinized by the Power of Reason.

The above statement is a paraphrase of something I first heard from Abraham (Esther Hicks) years ago. It was one of those enlightening moments when something is said, or read, that, as I like to say, lit up for me. One of those pivotal moments in my learning processes. I learned and then accepted the idea that I didn’t have to continue to believe teachings I had been taught, but found difficult to agree with.

There are so many of those, shall I say, ideas I had been told, or taught, to believe, which I found difficult to accept, that it would take lifetimes to write about all of them. Anyway, I’m going to step away from that subject before it becomes too digressive.

I’m going to continue a bit with the subject of an intelligent universe, and how I reached the pivotal point of accepting it fully into my belief system. I had heard about it and did much contemplating on the idea, but it remained at that until I read something from the great physicist Max Planck. From then on I accepted it completely, and my Power of Reason agreed.

During a Nobel Prize acceptance speech, he said: “As a man who has devoted his whole life to the most clearheaded science, to the study of matter, I can tell you as a result of my research about the atoms this much: There is no matter as such! All matter originates and exists only by virtue of a force which brings the particles of an atom to vibration and holds this most minute solar system of the atom together. . . . We must assume behind this force the existence of a conscious and intelligent Mind. This Mind is the matrix of all matter.”

There is no matter as such!

The Dictionary defines the word illusion as follows: “Something that deceives by producing a false or misleading impression of reality.”

Every deep and learned spiritual teacher I’ve ever had the privilege of reading or listening to has taught, in one way or another, that this physical world of matter is an illusion. It seems that Planck’s life-long study and resulting conclusion as stated above, reinforces their teachings using the medium of science.

The Course is unwavering in its teaching of this truth. It plainly states: “There is no world! This is the central thought the course attempts to teach.“ Wow! Most humans will find that idea almost impossible to accept. But if it’s looked at from the position the Course takes in other areas of its teaching then it’s relatively easy to understand.

It also teaches that we’re not here: “In any state apart from Heaven, life is illusion.” Wow again! How can that be? Well if there’s no world then it shouldn’t be that difficult to understand we’re not here. The Course explains: “Nothing at all has happened but that you have put yourself to sleep and dreamed a dream in which you were an alien to yourself and but a part of someone else’s dream.“

Even in this physical world of illusions if you go to bed, fall asleep and have a dream, during the dream you don’t realize you’re dreaming nor do you realize you’re asleep. Even so, you are asleep and dreaming and yet everything seems to be real, and you’re not aware it’s not real until you wake up.

It’s the same with our true Selves. We were determined to separate ourselves from our Creator, which is impossible. So we did as the above quote says; we put ourselves to sleep and dreamed a dream – that’s all. Therefore, this whole world which seems so solid and real is a dream, an illusion – it doesn’t exist.

We were able to perform such a feat by misusing the mighty Power of creation with which our Father endowed us when He created us. The thing is, it’s awful enough that we have done this to ourselves, but it gets worse. The worst part is we’ve placed ourselves at the mercy of others by allowing ourselves to be part of someone else’s dream.

And right there is one of the most important lessons anyone will ever learn while they think they’re in this physical world. It’s this: If you’re part of someone else’s dream then you’re simply a figure  in their dream, and therefore have no control over your own experiences. If they dream of sickness and pain then you have no choice but to be sick and in pain. But for those who can accept the truth that this so-called life is a dream – an illusion – the Course says  – this need not be!

You have put yourself to sleep

All healing depends on acceptance of the truth of what you are and what this world is. You are not a figure in someone else’s dream, you are a glorious creation of a Glorious Father – you are as real as God is. But the world as you perceive it is a dream – an illusion – being dreamed by you and no one else. It’s not someone else that’s doing the dreaming, it’s you. Once you can accept this then you’re on your way to an awakening, for it’s now within your power to take control of your own dream.

The Course is plain in its teaching concerning your role in the dreaming of the world. It states: “You are the dreamer of the world of dreams. No other cause it has, nor ever will.” Once this fact is recognized and accepted then a change of dreams can take place. And yes, it will still be a dream as long as you’re in this physical world. It can be nothing else because the world itself is a dream. But that being said, the dream can now be changed to one of health, happiness and love instead of one of sickness, worry and fear.

“What is forgiveness but a willingness that truth be true?”    …ACIM

There is no road to awakening other than through forgiveness. The awakening process begins the moment we accept the truth that this so-called life is a dream. From the perspective of forgiveness we realize, as the Course says, nothing at all has happened. Once this awareness is realized as true, then we can change our minds and think thoughts of Love, peace and happiness.

As the above quote implies, true forgiveness simply means to accept that the truth is true. We forgive ourselves by accepting the truth that the past is gone, and does not exist.  True forgiveness means to place all things, including the future, into the Hands of God, and allow Him to change all our dreams to happy ones.

I’m going to close this post with a quote by Caroline Myss. She said: “The love that flows through your heart purifies not only your own spirit, but the love you share with others.”