“If you are not growing by expanding your mind’s full potential, then you’re probably not paying much attention to the hidden lessons contained in each moment of your life. ”   …Anon I mus

How many people have ever lived on this planet, possibly excluding those who have died real early in their years, and have not had a negative thought? There’s not a human being that at one time or another hasn’t experienced some negative thoughts.

If a bit of negative thinking was the problem humanity would not have a chance of survival at all. It’s only because some learned to change their thoughts from those of fear to those of love that has allowed humanity to survive throughout the centuries.

“When I despair, I remember that all through history the ways of truth and love have always won…”   …Mahatma Gandhi

The ways of truth and love are not for the select few only. Those ways are for each and every one of us who are willing to withdraw our thoughts from falsity and fear and point them toward truth and love.

None of us will ever be spiritually awake to the point where a negative thought won’t subtly slip itself into our thinking now and then. It’s going to happen. Therefore  that’s not the problem we have. The problem arises when we give in and allow them to remain with us. The longer we hold onto and dwell upon negative thoughts the more of our power we transfer to them; that’s the problem.

The thing about the truth is, it doesn’t require belief for it to be what it is. It matters not whether you believe yourself to be a co-creator with God, the truth is, that’s what you are. But it’s not my intention to convince you of the truth, for the truth will eventually reveal itself.

Right here I just want to ask a couple simple questions, something for you to think about: What if; what if it’s true? Can you even imagine how much power that’s inherent within you in order for you to be a co-creator with God? Whatever amount of power your mind comes up with it’s going to fall short unless it answers, unlimited.

And that’s the amount of power we give to negative thoughts when we accept them into our minds and dwell upon them. Whatever their focus is, whether it’s sickness, lack of abundance, misery, or some other negative condition. if we dwell upon them we provide the power necessary to bring in into our lives. “Dwell upon” is the key phrase here, for it’s the cause of the problem not the thought itself.

“One makes the physical and the other creates the spiritual…”   …ACIM

The above quote is talking about thoughts. Those that make the physical are those that,  as the Course says,  represent lower-order thinking. We should take notice that these make and those which it calls higher-order, create. This tells us just how powerful our thoughts are. Even those we think in this lower-order physical dimension are powerful enough to make the physical world we see.

Do you really want to give that kind of power to thoughts that are focused on any condition that you don’t want in your life? Sometimes negative thoughts slip themselves into our minds without our awareness, and suddenly we realize we’re thinking about some unwanted condition such as sickness.

When this happens we’re faced with a choice. We can continue to think about the sickness and by doing so make more of it for ourselves. Or we can change our thoughts. It’s always a choice. 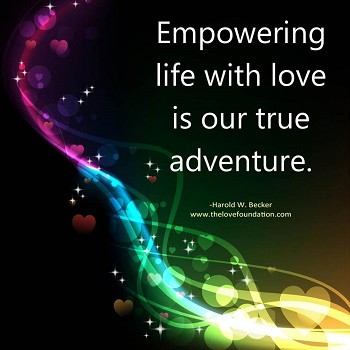 I Am as God Created Me

Most people believe it’s difficult to change our thoughts, but the truth is, it’s easier than we think. If you would like an easy way to do it, look at the above quote and think about what it says. You don’t have to think too hard, too long or too deep. Just long enough to get a rough idea of the meaning behind the words, I am as God created me and to impress them upon your heart.

It doesn’t say you were as God created you, nor does it say you’ll be as he created you in the future. It says you are as he created you right now, at this very moment. It doesn’t matter whether you believe what it says, or not. We’re not working on beliefs, they have nothing to do with it. It’s simply an exercise to help you change your thoughts whenever you feel you should.

The Course also says: When God created you, He made you part of Him. Now think about those words for a few moments. Again, you don’t need to think hard, long or deep. Just long enough to get a rough idea of the meaning behind the words, when God created me He made me part of Him. Again it matters not whether you believe them or don’t believe them, for belief has nothing to do with it.

I Am as God Created Me and I Am Part of Him.

The above statement consists of just twelve short words, but the meaning underlying them holds an infinite amount of power for you to use; more so than any other words in the universe. They contain the power to help you change your thoughts in an instant regardless of whether you believe them or not.

Try this simple exercise: The next time you catch yourself thinking about some negative condition such as sickness or some other thing you don’t want more of in your life. repeat these words: I am as God created me and I am part of Him. And then think a bit upon what they mean; what they’re telling you.

They are holy words and as you say them their full meaning will form a relationship with your heart. And I guarantee you that if you’ll repeat them with sincerity a few times your thoughts will return to the positive. (The heart here isn’t the physical pump beating in your chest. It’s the very center of your Being; the very center of your true Self – the center of Love.)

What Does it Mean to be Part of God?

I have no specific answer to the above question. But that being said, I do have a few ideas of what it means. For one thing, it means that we have the power to create, or make, worlds, for we are co-creators with Him.

The words with Him should be paid attention to. For every problem that humanity has ever faced comes from the idea that we can create separate from Him. The world we see around us and the lives filled with misery, sickness and death we’re living are the results of this erroneous idea.

I’m going to close this post with a quote from the inspirational speaker and author, Eddie Capparucci: “What starts out as an intrusive thought can turn into an overwhelming concept if we ‘feed’ it with more negative thinking.”

Thank you for visiting this blog – I am eternally grateful

ALL IS LOVE – LOVE IS ALL – THERE IS NOTHING ELSE