“Those who remember always that they know nothing, but who have become willing to learn everything, will learn it.”   …ACIM

Here I go again, choosing one of the most difficult subjects in the entire universe to write about. Again that universal and pesky little question raises its inquisitive and protesting voice, as it asks; why? And then it continues on with; know you not that subjects like this one should be reserved for the more learned minds? For scientists, masters, professors, therapists, theologians, philosophers and other such minds of deep thinking and learning?

The only answer I can pull up is: I don’t know why. Maybe it’s because I’ve never received an explanation or a theory from any of those minds that has satisfied me. So I’ve made a decision. I’ve decided to explain it to myself. I’m going to let the thoughts I presently hold and some that I hope will come to me as I continue, flow onto this page. And then I’ll see if it satisfies myself. That’s it. No other reason than that. I guess it could be called, an expression of my own thoughts.

“To know why or how something happens or works.”

The above is one of  the definitions of the word “understand” as I have copied it from the Cambridge Dictionary. There were others, but this one drew me to it like a magnet attracts iron. It’s almost exactly what’s in my mind as I continue to search for the why, the how, the who and the what of this experience we call life.

There’s something I already understand, which is this: There are some things that will never be understood as long as we believe we’re in this world. For as the above dictionary definition implies, to understand is to know. And in this world it’s impossible to know for this is a world of illusions; a world of questions without answers.

Does it not stand to reason that if we knew we would stop asking questions? When you reach the point where you no longer need to ask questions it will be because you know; you will know your Self. And you will know that you’re not in this world.

“The universe of learning will open up before you in all its gracious simplicity.”   …ACIM

It’s plain for all to see that the above quote doesn’t say anything about learning being difficult or complicated. In fact, it implies just the opposite as it refers to its gracious simplicity.

The only way we’re ever going to recognize this graciously simple universe of learning is to closely examine some of the stuff we’ve already taught ourselves over eons of time. For what we’ve taught ourselves is at the opposite end of anything that even remotely resembles simplicity.

About this learning, Jesus says in the Course: “What you have taught yourselves is such a giant learning feat it is indeed incredible.” 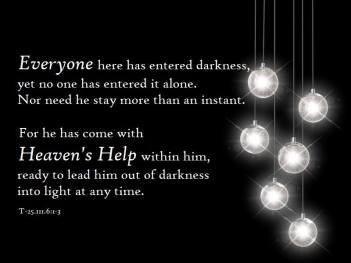 As we look at and contemplate upon these amazing feats of teaching and learning we’ll begin to realize how false they really are. How could we be separated from our Source of life and live?

How silly is it to believe we’re something other than we are? Is it the least bit sensible to think that what God created from Love can die? I think that if we  really think about and contemplate upon these questions we will have to conclude that we really don’t know anything.

As my opening quote implies, once we understand that we don’t know anything and are willing to learn everything, we’ll learn it. As the above header quote says, The universe of learning will open up before us in all its gracious simplicity.

Roughly two thousand years ago Jesus said to Pilate: “To this end was I born, and for this cause came I into the world, that I should bear witness unto the truth.”

In reply, Pilate asked rather sarcastically, “What is truth?” He then walked away without waiting for the answer, which Jesus didn’t give.

I don’t think Jesus would have answered even if Pilate had waited, because he understood that whatever he said would be scoffed upon. And with a shake of his head Pilate would probably let it go as being of no value at that moment. For Jesus knew that Pilate had to follow the custom of the people and release only one prisoner, which wasn’t going to be him.

Pilate said to the people, “I find in him no fault at all.” At that moment he recognized the Truth, which was, and will always be, that Jesus was, and is, innocent. But there was another truth Pilate had to deal with at that moment, which was the custom of the land. He wanted to release Jesus but couldn’t do so because of the people’s demand that Barabbas be released instead.

“You were not meant to suffer and to die. Your Father wills these dreams be gone. Let truth correct them all.”   …ACIM

I wonder what Pilate would have said, or how he would have reacted, if Jesus had said, the truth is, you are as God created you. For that’s the only Truth there ever was, there is, or there ever will be. Everything else, including suffering and death, are illusions, or as the above quote calls them, dreams.

Right here, right now, is a chance to understand just how powerful the egotistic mind is. If the above quote is true – and you can rest assured it is – then it’s your Father’s Will that these dreams be gone. Your Father in this context is none other than God Himself. But the dreams remain even though He wills they be gone. They remain with us because we’re afraid to let them go. That’s how powerful our minds are. They’re powerful enough to withstand even the Will of God Himself.

“God’s Will for you is perfect happiness…”   …ACIM

The above quote should help us realize that God’s Will and our wills are one and the same. For whom amoung us does not will to be perfectly happy? It seems to me that perfect happiness would have to exclude any thoughts of suffering and death in any form. But as mentioned above, these thoughts remain with us because we’re afraid to let them go.

And now these questions arise: What is it that we’re so afraid of; what is it that terrifies us to the point where we let thoughts of suffering and death exclude it from our awareness? The answer to those questions absolutely terrifies the ego, for it realizes that once the answer enters our awareness its demise is certain. For it cannot survive in the presence of LOVE.

Thank you for visiting this blog