“You are the master of your destiny. You can influence, direct and control your own environment. You can make your life what you want it to be.”    ..Napoleon Hill

Napoleon Hill was the author of the best-seller and self-help classic, Think and Grow Rich, which sold 70 million copies before His death. One of the world’s richest men at the time, and one of the founders of the US Steel Corporation was Andrew Carnegie. Carnegie had discovered for himself the so-called secret of obtaining riches that stretched beyond the simple acquisition and accumulation of money.

He became obsessed with the idea of sharing this so-called secret with the world. At the time, Napoleon Hill was a young news reporter from West Virginia, and Carnegie contracted him to research and write a book about it. Hill spent 20 years studying and researching the so-called secret of success, which is how the book, Think and Grow Rich came into being.

A Story From Memory

I’m going to repeat a short story from memory, which I heard Jerry Hicks tell one time. To accept this story will require you to open your mind to possibilities that extend beyond this physical world. It will also require the belief that there is no such thing as death.

Napoleon Hill left this physical experience in 1970, and even though I don’t know what year this story took place, it was later than that.

At one of their meetings, Esther whispered to Jerry and told him that Napoleon Hill wanted to talk with him. Jerry didn’t take time to question or doubt her, he simply left the meeting and proceeded to their bus where it was quiet, and had a conversation with Napoleon Hill who had experienced that which we call death some years prior.

During the conversation Jerry asked him if there was anything about his book, Think and Grow Rich, that he would change if he had it to do over again. Hill said that he wouldn’t allow the editors to remove all the words they did that had anything to do with frequencies and vibrations. He said they removed any and all words or phrases that had any connection to these subjects whatsoever, and he wouldn’t allow them to do that if he had it to do over.

“If you want to find the secrets of the universe, think in terms of energy, frequency and vibration.”    …Nikola Tesla 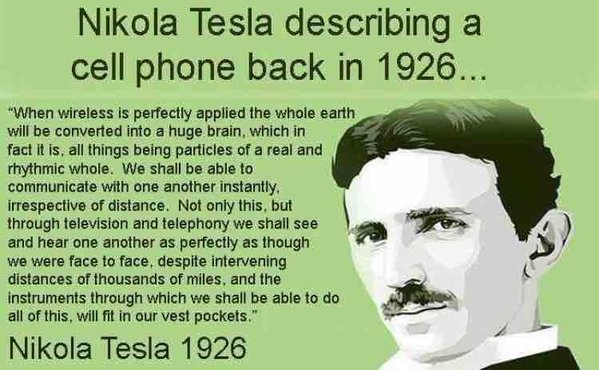 Even though he is not as well known as most famous inventors, Nicola Tesla was one of the most brilliant minds ever to grace this planet.

Whenever you plug your hairdryer or coffee pot in and it heats up, or you snap a light switch and the light comes on you can thank Nikola Tesla. For he was the inventor of alternating current, the same current which powers all our homes today. As seen in the above image, his mind was such that he was able to describe a cell phone back in 1926, 47 years before they were actually brought into existence.

“There is no matter as such!”  …Max Planck

Max Planck was a German theoretical physicist, who was considered to be the founder of quantum physics, and one of the most important physicists of the 20th Century.

In a speech in 1944 he said: “As a man who has devoted his whole life to the most clear headed science, to the study of matter, I can tell you as a result of my research about atoms this much: There is no matter as such. All matter originates and exists only by virtue of a force which brings the particle of an atom to vibration and holds this most minute solar system of the atom together. We must assume behind this force the existence of a conscious and intelligent spirit. This spirit is the matrix of all matter.” 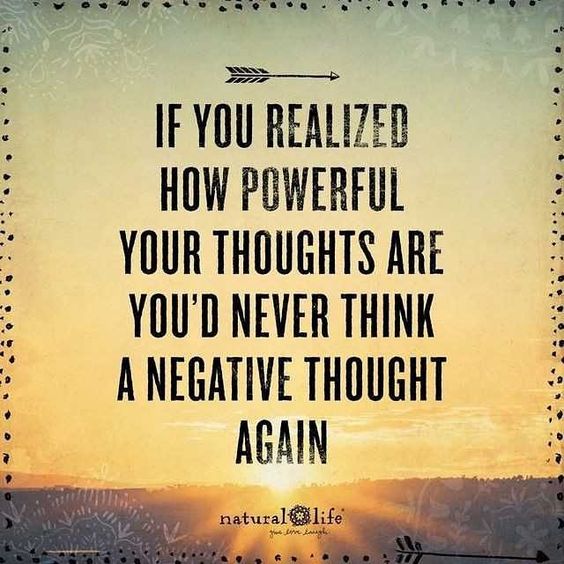 Lynne McTaggart is the author of six books, including The Intention Experiment and The Field. She has been significantly criticized, especially by the medical establishment, for her stand against vaccinations.

Whether she’s right or wrong in that stand is not for me to judge. I’ve quoted her here because of her powerful words concerning thoughts. I love her idea that our thoughts radiate out like starlight, affecting everything in their path. It fits perfectly with the quote in the above image. 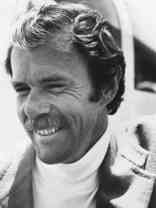 “Every person, all the events of your life are there because you have drawn them there.”   …Richard Bach

Richard Back is one of my favorite authors, and also one of my favorite people to quote. I think this is so because he seems to be able to navigate between the physical and the Spiritual with precision and ease. He’s able to transport his readers to a place where the line between fiction and non-fiction becomes blurred and in some cases disappears altogether.

When he says, that you have drawn every person and event of your life to you, it seems to be in harmony with Napoleon Hill’s observation in my opening quote: You are the master of your destiny. You can influence, direct and control your own environment. You can make your life what you want it to be.

But I think the difference between the two is that when Bach wrote about subjects like the one mentioned above he did so from a place of an inherent belief. Whereas Hill spent enough time physically studying the subject that when he wrote he did so from an acquired belief brought about by experience.

Bach implied that it doesn’t matter whether we’re aware of it or not, or whether we believe it or not, we are attracting whatever we experience into our lives. And most of the time it’s done unconsciously, which means we’re doing it without even being aware of it.

On the other hand, Hill stated quite emphatically that humans are the masters of their destiny. They can influence, direct and control their own environment, and that we can make our lives what we want them to be.

I have mentioned Jerry Hicks’ story concerning Napoleon Hill, along with Nikola Tesla  and Max Planck in this post because of their references to frequencies and vibrations, for that’s how everything works. As Albert Einstein once said: “Everything is energy.” This truth was known long before Einstein made his announcement, but it was scientists like him who gave us the scientific evidence for it. It has been presented to humans from, at least, the time of the ancient Greek philosopher, Pythagoras.

Plato wrote about it as “seen and unseen energies.” Everything we see around us, which we call physical, is nothing more than energy vibrating at a very low frequency. This is the seen energy Plato mentioned. Notwithstanding the fact that there are unseen physical energies such as radio, microwave, electricity, etc., etc., I believe Plato’s unseen energy to be that which I refer to as Spirit. The same conscious and intelligent Spirit that Max Planck used in his speech which I referenced earlier. 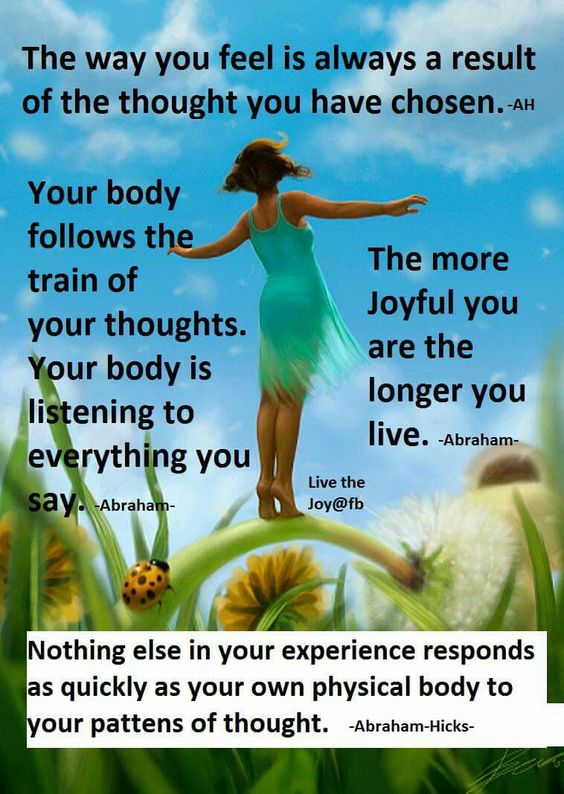 In this physical environment energy is always vibrating at different speeds, depending on where its being used, and for what. These different speeds are known as frequencies.

For example, if we take a radio tuner and turn the dial to different frequencies we will hear different stations. It’s the frequency rate at which they broadcast their signals that keeps all the stations separated.

But all of this physical energy means nothing. Like the rest of this physical environment it’s all illusions. Max Planck touched upon the only real part of it when he talked about, bringing the particle of an atom to vibration. He said, We must assume behind this force the existence of a conscious and intelligent spirit.

Love is the Only Energy There is

It’s not possible to even discuss the frequency rate of Love, except to say, God is. To try and go any further simply puts us into a place where nothing we say means anything. For this belongs to the realm of Knowledge which is not of this world.

Love, or God, has no opposite, but in this world of duality we must assign an opposite to everything, including Love. Therefore, we reach to the lowest frequency we’re capable of, which is at the very bottom of the ego’s thought system. This frequency conjures up an emotion we call fear, which we then perceive as Love’s opposite.

About this the Course says:  “If perfect love casts out fear, and if fear exists, then there is not perfect love. But only perfect love really exists. If there is fear, it creates a state which does not exist.

The above description is pretty well how Abraham describes the Law of Attraction. It’s not a new law even though they have given it that name relatively recently. It’s the basic law of the physical universe, and it came into existence at the same time we believe we separated ourselves from our Source. Before that it was not needed, because we were given Everything at our creation, therefore, there was nothing to attract.

Since the separation every human has used it either consciously or by default. Whatever we think about consistently we are attracting into our experience. As Richard Bach said, “Every person, all the events of your life are there because you have drawn them there.” The thing is once we can accept this then we can consciously begin to think more about the things we want in our lives, and less about things we don’t want.

I’m going to close this post with a quote from Abraham: “Your body is the very first thing that responds to your vibration. It’s responding to how you feel, which equals your point of attraction.

I AM TRULY GRATEFUL FOR YOUR VISITING, COMMENTING ON OR LIKING THIS BLOG – THANK YOU