If you keep good food in your fridge, you will eat good food.   …Errick McAdams

Mr. McAdams was correct in his observation, for there’s no denying the fact that if we keep good food in our fridges we’ll eat good food. But the problem with this idea is, he didn’t explain what constitutes “good” food. In this world the word good can have a different meaning for almost everyone. Therefore, that which I consider to be good food you may not think of as good at all.

I think it would be safe to assume that when he made that statement he wasn’t thinking about the taste of the food. I think he was thinking more about health and therefore, his comment refers to food that he considered to be good for our health.

This post is about food and its relationship to health. But I want to make it perfectly clear that I am not trying to tell you, you shouldn’t eat food you consider to be good for you. I’m simply going to express that which I have derived from a lifetime of experience. I will express my own beliefs about food and health, and how those beliefs have changed throughout the years.

It’s not meant to persuade or convince anyone or to change anyone’s beliefs. It’s simply an expression of my own perceptions as I see them. You’re free to take what may resonate with you and leave the rest.

“If you don’t take care of your body, where are you going to live?”  …Unknown

There was a time during my younger years when I would have taken the above quote serious, but now I see it as somewhat humorous. That’s an example of how much my beliefs concerning the subject have changed. It’s not the taking care of the body part I find humorous, but the question; where are you going to live?

I find it so because it portrays the ego belief, which is accepted by most humans, that we live in these physical bodies. I now find that belief to be ludicrous to the point where it becomes laughable. But that being said, I’m not making light of anyone’s beliefs, I’m simply expressing my belief that we’re Spiritual creations, which could never be contained in physical bodies.

“The mind is everything. What you think, you become”   ..Buddha

Even though the above quote was voiced, at least, 2500 years ago, it remains as factual today as it was then. That’s because, contrary to popular belief, truth never changes. In other words, time has no effect on truth whatsoever. What was true before time began is true now, and will still be true when time is over.

The information contained in the Buddha’s quote is paramount to the subject of this post, especially the last part; what you think, you become. Eventually all of us will reach that point of understanding where we realize the body’s health does not depend on the food or drink we give it. We will understand that everything, including the body’s health depends entirely upon our thoughts and beliefs.

In a previous post I asked the question: Why doesn’t eating a healthy diet apply the same to everyone?

The answer is in the image to the left. It comes from that group of non-physical entities who offer blocks of thought to Esther Hicks, who then translates them into audible words.

As they imply, all people don’t respond in the same way to food, whether it’s so-called health food, or so-called bad for your health food. As they say, “It is the way you are thinking about the food.”  If you think the food will contribute to good health then it becomes an aid to your health. On the other hand, If you think it won’t then you’re right, it won’t.

Are You What You Eat?

It’s a pretty common belief in this world that you are what you eat. According to the Website, The Phrase Finder, this phrase had its origins in 1826 when the French politician, Jean Anthelme Brillat-Savarin, wrote the following in French “Dis-moi ce que tu manges, je te dirai ce que tu es,” which translates into English as: Tell me what you eat and I will tell you what you are.

The exact phrase, you are what you eat, appeared for the first time in an advertisement for beef in 1923. It was this: “Ninety per cent of the diseases known to man are caused by cheap foodstuffs. You are what you eat.”

There is something that this blog keeps repeating often, which is this quotation from A Course in Miracles: “You see the flesh or recognize the Spirit.” As of this month, January 2019, the current world population is estimated to be 7.7 billion. And of those billions there’s not one person that can neglect this decision. In this world the decision to see the flesh is made by default, but to recognize the Spirit requires a conscious decision. Therefore, each and every person either sees him or her self as a flesh body or they make a conscious decision and recognize they’re a Spiritual creation.

“Thinking is difficult, that’s why most people judge.”   …Carl Jung

John F. Kennedy also implied that thinking can be uncomfortable when he referenced the discomfort of thought in his quote I repeated earlier. Most people equate mental activity with thinking, but they are not the same at all. I mention this here because it needs to be clarified as it relates to the Buddha’s idea that, what you think, you become. And Abraham’s assertion that it is the way you are thinking about the food. 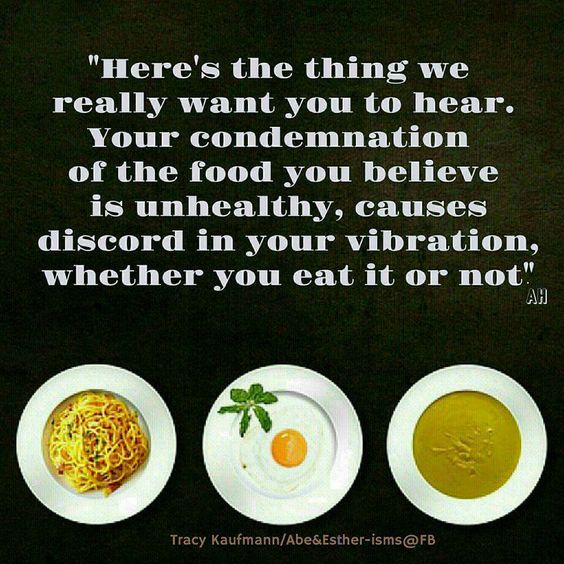 When we’re thinking about our body, our health, or our food, we must remain steadfast in our determination to not let negativity slip in with its negative and fearful thoughts. Keeping our thoughts focused on the outcome we want is thinking.

When we allow our thoughts to swing back and forth between  the outcome we want and that which we don’t want, that’s simply mental activity.

I’m going to close this post with another Buddha quote: “The secret of health for both mind and body is not to mourn for the past, not to worry about the future, or not to anticipate troubles, but to live in the present moment wisely and earnestly.”

THANKS FOR VISITING THIS BLOG – I AM TRULY GRATEFUL