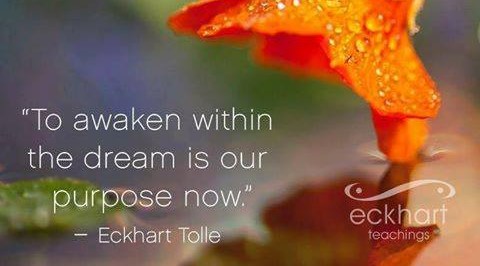 “Is all that we see or seem but a dream within a dream?”   …Edgar Allan Poe

As far as I know it was Shakespeare who coined the phrase,“Life is but a dream within a dream,” in his play “The Tempest.” It was written at least two hundred years prior to Poe writing his poem, “A Dream Within a Dream.” I can’t help but wonder if Poe was thinking about Shakespeare’s words when he wrote his ageless poem, and asked the question: Is all that we see or seem but a dream within a dream? I also like to think that he already knew the answer and his question was designed solely to cause his audience to think of it as a distinct possibility.

I think that many of the deep thinkers such as poets and playwrights have their doubts about the reality of this physical experience we so fondly refer to as life. They do so because of their understanding that the Source of their work dwells in a different dimension than this physical environment. And maybe their poems and plays provide safe outlets for them to express these doubts, and ask their questions without being scorned and ridiculed for such far-out thinking.

Wow! Some people are so far-fetched in their thinking and the things they say, that it’s really difficult for most people to take them serious. And such seems to be the case with Eckhart Tolle, especially by promoting ideas like the one in the above quote.

According to The Sun magazine, at the age of twenty-nine Eckhart Tolle was a research scholar, supervisor, and doctoral candidate at Cambridge University in England. Those credentials don’t necessarily portray a mind that would say things like, “To awaken within the dream is our purpose now.” Or, “You are the universe, you aren’t in the universe.”

But they do provide a bit of insight into the extent to which his beliefs must have  changed during his spiritual transformation. And to me they add credibility to his claims, which makes me feel as if I’m not alone in my far-fetched thinking.

“This world? And everything in it? Illusions, Richard! Every bit of it illusions!”

Even though the above quote is voiced by the fictitious character, Donald Shimoda, in Bach’s wonderful little novel, Illusions, I believe it reveals the belief of the author. I have read this book, and it remains one of my favorites. I have also read some of Bach’s other books, and except for the descriptive accounts of the art of flying an airplane in some of them, which wasn’t relative to me, I love his style of writing.

I have deduced from reading his works that he is a deep-thinking spiritual person, and to accept and believe this world to be an illusion wouldn’t be a stretch at all for him. For me he has been a motivator into deeper thinking, and many of his sayings have been constant companions of mine over the years.

“You are always free to change your mind and choose a different future, or a different past”

The above quote is an example of the many deep thoughts expressed by Richard Bach that I’ve kept with me over the years. Even so, I have found the last part of this one to be a bit troublesome, but haven’t dismissed it because, as the metaphor goes, it provides some great food for thought.

The first part concerning the freedom to change our minds, and choose a different future is absolutely in line with everything I’ve learned and come to believe. But that being said, it still requires much contemplation for its meaning to brush itself off and enter into the light. I say this because in order to even desire a different future we must be aware of the one we’re presently headed toward.

“If you do not change direction, you may end up where you are heading”   …Lao Tzu

It seems there could not be anything more obvious or uninspiring than the information contained in the above quote by the ancient Chinese philosopher and founder of Taoism, Lao Tzu. But even so, like all deep and everlasting thoughts, this simple one still lives on after more than twenty-five hundred years. And it’s as relevant now as it was the day it left the tip of his tongue or that of his writing instrument, whatever that was back then.

Even though his quote and the one by Richard Bach originated more than two centuries  apart they complement each other. Once we reach the conclusion that our lives aren’t as we imagine they could be, then it’s time to ask if a change is not needed. And as Bach said, we’re always free to change our minds and choose differently.

But if we continue on heading in the same direction we have two options. We can stop traveling and stagnate, which is why Lao Tzu said, you may end up where you are heading. In other words, reaching our destination is not an assured thing. But if, on the other hand, we keep trudging along in the same direction we will eventually end up where we’re heading – It’s just that simple.

“You cannot separate your Self from your Creator”   …ACIM

As I once said, this blog has only one message to give, even though it’s given in different ways. What other message is there to give other than, the truth is true and nothing else is true? The Course is adamant in its teaching of the above truth. To separate from our Creator would be to separate from the only Source of Life there is. It doesn’t take much use of the Power of Reason to understand such a feat is impossible. But yet, as I keep repeating, that’s exactly what we think we have done.

And every negative condition of the human experience – it matters not which one you can think of – has its origin in this belief. That’s why when discussing negatives in the human condition the Course tells us: A sense of separation from God is the only lack he really needs to correct. That’s it! The only need we really have is to change our minds about this false belief.

The journey into darkness has been long and cruel, and you have gone deep into it.

This “darkness” the Course mentions in the above quote is simply a lack of the Light of understanding. We have been trudging wearily along this darkened road for eons of time. In fact, the separation and time began simultaneously, for we believe we separated ourselves from God, and by extension from eternity, whose opposite is time.

But there can be no opposite to God, and none to eternity. Therefore as Albert Einstein understood and pointed out, time is an illusion. He said: “The distinction between the past, present and future is only a stubbornly persistent illusion.”

And where is this journey into darkness – this belief in separation – leading us; where are we headed; where will we end up if we don’t change direction as Lao Tzu said? The Course tells us: “This is the road to nowhere, for the light cannot be given while you walk alone.”

And where can a road to nowhere on which we walk alone in a separated state lead us except through misery, old age, sickness and finally, death? That, my friends, may sound depressing, maybe even morbid, but regardless of that, it’s the destination of every traveler who believes this world is real. You may not like it; you may throw up your arms in disgust; but even then you still know it’s true.

know this need not be

But there is good news in all of this, as Richard Back said, you are always free to change your mind and choose a different future. The Course agrees with him. It says, Yet is salvation easily achieved, for anyone is free to change his mind, and all his thoughts change with it.

I’ve been talking about roads and directions, but that being said, there’s something I must clarify, which is this: There are no roads to travel and there are no directions to follow. There is only the need to change your mind and awaken from the dream. For as the Course says, “A journey from yourself does not exist.”

I’m going to close this post by repeating Eckhart Tolle: “To awaken within the dream is our purpose now.”

Thank you for visiting this blog – I truly appreciate it

REMEMBER: GOD’S WILL FOR YOU IS PERFECT HAPPINESS

2 thoughts on “To Awaken”