“God’s promises make no exceptions. And He guarantees that only joy can be the final outcome found for everything.”    …ACIM

What am I; who am I; where am I; where did I come from; where am I going; what happens after death? Are these not questions that most of us ask ourselves at times? Have you ever stopped to wonder why it is that hardly any of us know who we are? How is that possible; how have we become so lost that we don’t know who we are, or where we’re going?

It’s not the physical body I’m referring to, for that is the chosen home of the ego. The ego wants you to believe it knows the answers to these questions. Ask it who, or what you are, and it will tell you that you’re the human your parents gave a name to. Ask it where you are, and it will sneer, and ask, “How could you not know where you are?” Ask it what happens after death, and it will give you the most fearful answer it carries in its arsenal of fear-filled illusions. As the Course points out: “No one who follows the ego’s teaching is without the fear of death.”

“The ego is the belief of the mind that it is completely on its own.”   …ACIM

The above quote provides us with a clue as to how much out of touch the ego really is. It is nothing but a false belief in the impossible. If somehow we could find the means to withdraw our belief in the impossible the ego would fade away. As the Course reminds us: “…You believe that without the ego all would be chaos. Yet I assure you that without the ego all would be love.” It takes a great amount of desire, commitment and repetitive practicing to unlearn a false belief, and allow the truth to fill its space.

The ego is adamant in its insistence that we hold onto the past, as the Course tells us: “The past is the ego‘s chief learning device.” I contend that our past learning of false ideas concerning the subject of death is the foundation of all our ills, misery and fears about life. It took a great amount of effort coupled with false learning to reach the point where we no longer know anything about our own reality. And it will take some major commitment and unlearning to get back to where we began.

That’s right; we need to return to where we began. Not to the beginning of our existence, for there’s no such place. But to the Home we think we left, and the Father we believe we separated from when we made the ego. I understand that most people believe we’re supposed to advance in the direction of future enlightenment. But that’s not the case, for we are already enlightened, we simply need to become aware of it. Besides that, then we would be advancing to that illusionary time and place I wrote about in this post, which we call someday.

The ego is a belief in the impossible

If you’re reading this post then you can rest assured that you have not performed the impossible, which is to separate yourself from your Source of Life, as the ego contends. The Course confirms this when it says: “You cannot walk the world apart from God because you could not be without Him. He is what your life is. Where you are, He is. There is one Life. That Life you share with Him. Nothing can be apart from Him and live.“

Here I am, writing this post, expressing myself to the best of my ability, and then realize I may have written myself into the corner of contradiction. A couple of paragraphs ago I wrote to the effect that we need to return to the Home we think we left, and to the Father we believe we separated from. In the above quote the Course tells us that, Nothing can be apart from Him and live.

So I ask myself; if we haven’t left Him how is it possible to return to him; and how do I reconcile theses seemingly different points of view? The answer is really easy, it’s contained in the two words, think and believe. We think we left our Home, and believe we separated from our Father; but it’s not true. We think and believe we have done these impossible deeds because we allow the ego into our minds with its false teachings. 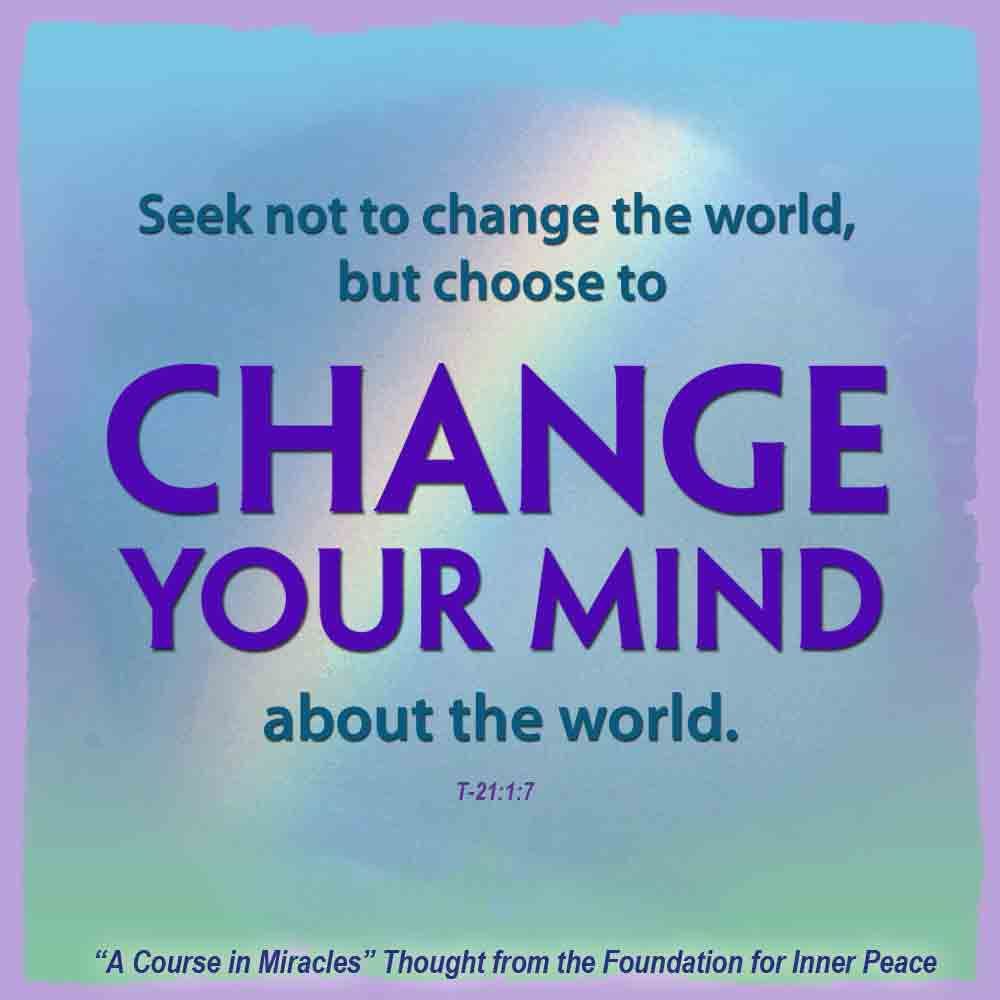 To return in this context simply means to change our minds. But even though it requires no more than that, we must realize it requires no less than that. As I pointed out earlier: It takes a great amount of desire and repetitive practicing to unlearn a false belief, and allow the truth to take its place. I apologize for repeating myself, but there are times when repetition is necessary because of the seriousness of the situation.

“You cannot wake yourself. Yet you can let yourself be wakened.”   …ACIM

The above quote implies that we are asleep. For how could we be wakened from anything other than sleep? This whole physical experience, which most of us fondly refer to as life, is nothing more than a dream. Or, as I prefer to call it, an illusion. Eventually, every person will come to realize and accept that it is a dream and let themselves be wakened.

Allowing ourselves to be awakened requires the change of mind I mentioned earlier. It’s a change of mind to the recognition of Spirit and a different Thought System from which to think. Once we reach the point of recognizing the Spirit, then we’re getting close to understanding the most important aspect of all. We understand that we are not part of the dream, but we are the dreamers who are asleep and dreaming.

“If you are the dreamer, you perceive this much at least—that you have caused the dream and can accept another dream as well.”   …ACIM

Once we can convince ourselves into accepting the idea that this physical experience is a dream, which we ourselves are dreaming, we’re getting close to being wakened. But that being said, waking does not happen instantly. As the above quote points out, You have caused the dream and can accept another dream as well.

The Course explains how waking begins: “You will first dream of peace and then awaken to it. Your first exchange of what you made for what you want is the exchange of nightmares for the happy dreams of love.”

We don’t realize how powerful our minds are. For in our determination to be separate from our Creator we have convinced ourselves that we have done the impossible. We believe we have separated ourselves from Him, which is impossible to do.

I understand that I may sound repetitive as I keep stressing the impossibility of doing that which we believe we’ve done. I assure you it’s not an oversight on my part, but designed to stress a point. For it’s this false belief in the impossible that has caused us to have nightmares of fear, loneliness, old age, sickness, death and all other negative emotions and experiences.

We have buried the memory of God so deep in darkness and fear that we have no idea He’s still in our minds. Getting rid of the false belief that we are separate entities at the mercy of whatever the world throws at us should be our top priority. In doing so we will begin to exchange what we made for what we want.

And what is it we want? Left to ourselves we don’t know what we want. But Jesus tells us: what you want is the exchange of nightmares for the happy dreams of love.”

I’m going to close this post with a quote from that great spiritual Teacher, Neale Donald Walsch: “Nothing is as bad as it seems. Nothing. There is a benefit and a blessing hidden in the folds of every experience and every outcome. That includes every and any ‘bad’ thing that may be happening to you right now.”

I truly appreciate you visiting this blog – Thank You

Remember: The Children of God are Entitled to Perfect Comfort